A Closer Look at Ethereum, TRON and EOS DApps

As of today, there is a total of approximately 2600 dApps running on blockchains such as Ethereum, TRON, EOS and POA with a low rate of daily active users. Only half of the all dApps is active right now, the rest is either in the early stages of their development or totally abandoned.

Let’s take a closer look at the dApp space.

Most of the dApps are built on Ethereum and the blockchain now serves 86.7% of the all dApps. TRON and EOS are the most popular blockchains after Ethereum, which come to the fore in dApp usage, though they together run only 10.6% of all dApps. 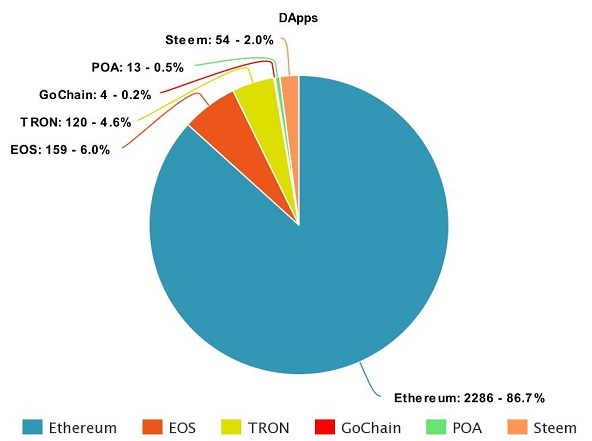 If EOS has 2286 dApps right now, with the same ratio between the number of dApps and DAU, that would make 594.9k daily active users. That shows the potential of blockchains like TRON that scale better than Ethereum.

However, rising blockchains in the space would not necessarily affect negatively the popularity of the leading one, Ethereum. As a dApp can run on different blockchains at the same time, other blockchains may rather surpass Ethereum in terms of transaction volume and usage if Ethereum can’t scale. Blockchain Cuties, running on three blockchains, is a good example of such multi-blockchain dApps.

On the other hand, dApps of EOS and TRON is not yet as diverse as the those of Ethereum. Excluding TRON blockchain, there are, respectively, 495 games, 354 gambling and 262 social dApps in the dApp space. Ethereum dApps are much more diverse compared to other blockchains. Besides games and gambling dApps, there are many decentralized exchanges, marketplaces such OpenSea and different dApps.

In EOS and TRON blockchains, primarily gambling dApps, and blockchain games constitute the majority of the small number of dApps. As for Ethereum, the most used dApps are respectively ForkDelta, IDEX and Blockchain Cuties. In top 20, there are only 3 gambling dApps.

Top 20 list of EOS by usage has 12 gambling dApps, and TRON has 14, which also accounts for the very large number of transaction volume. It seems the capability of the EOS and TRON blockchains are mostly utilized by gambling dApps for now.

Data on dApps is provided by State of the ÐApps and DappRadar.